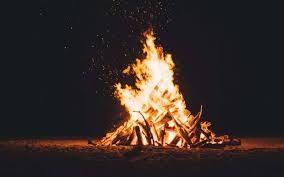 Bonfire Night is celebrated annually on St John’s Eve. The feast of St John ( the Baptist) is sometimes called Midsummer’s Day as it coincides with the June solstice.

Several days before a bonfire children and young people went to houses in an area looking for items to place on the holy fire. It was considered unlucky to refuse to give items for the fire.

Bonfires are lit at sundown and people gather around  to play music, sing, dance and have fun. It was customary for the younger people to jump over the flames to see who could jump the highest. Weeds were thrown onto the fire in the belief this would prevent the fields from becoming overgrown.

On Achill Island in County Mayo people used to scorch a herb called bugoir in the bonfire. This was then dried and kept as a cure for ailments.

It was tradition on St. John’s morning to scatter the ashes from the fire over the fields to keep the crops from harm.  Another tradition was to take a shovel of hot coals from the fire and take them to newly built houses. This was to ensure that the first fire in the house would have come from the bonfire.

Bonfires were traditionally called “bonefires”. This was because the bones from a pig or sheep were used a fuel for the fire. The bonefire was called “Tine Cnáimh” in the Irish language,  which translates to “fire of bone’s”.

Although the custom of the bonfire is no longer practised in all parts of Ireland, they still light up the night sky in County Mayo.

People need to be mindful of the dangers of lighting bonfires. They should be undertaken with great care to protect people’s safety and our enviromment.

Some more infomation in this night is available at the following links: