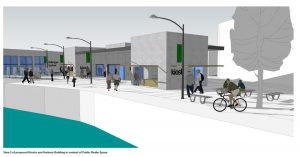 Contractors working on behalf of Fingal County Council have begun the demolition of O’Shea’s Buildings in Balbriggan after they were deemed to be dangerous structures.

The dilapidated buildings, which included the former Home Nightclub and a pub, closed its doors to the public for the last time several years ago and occupies a prime location on Balbriggan Harbour.

Archaeological monitoring will be put in place during demolitions in order to identify and record any significant historical remains of previous buildings on the site.

The works will include the demolition of all the buildings on the site and securing the perimeter of the site and are due to be completed by the end of January 2022.

Following the demolition of the buildings the council, through the Our Balbriggan Regeneration Project, will move ahead with plans to create a lively pier and waterfront area that will open up greater tourism opportunities for the town. The regeneration of Balbriggan will see a significant transformation of the town, with plans to create a vibrant new cultural, leisure and business hub.