DESCRIPTION
Early in the 1790’s George Grierson II (1763-1821) chose this remarkable setting to build a Georgian Sporting Lodge in the foothills of the Dublin Mountains, close to the source of the River Dodder, which meanders through the lands.
Glenasmole Lodge is located just over 10 miles south of Dublin City Centre, and was completed in 1792 when it was known as Heathfield Lodge. It holds a commanding and picturesque position at the head of Glenasmole Valley. For a period between 1835 and 1947 the lodge was known as Cobbe Lodge when Charles Cobbe of Newbridge House, Donabate and his family enjoyed the property as a sporting lodge, thereafter the present name has been in use.
The general area of Glenasmole, which is a tranquil valley, has always been treasured by those fortunate enough to know it, this name can be interpreted in two ways; either as the Valley of the Thrushes (Glen na Smolach) or as the Valley of the Smouldering Embers (Glen a’Smol).
It is a rare occurrence, if not a unique one, for a property with such a significant holding so close to the heart of a vibrant European Capital City to come on the market. It is ideal as a principal private residence or an easily accessible weekend retreat, with access to the M50 orbital motorway just 5.6 miles / 9 km away and Dublin International Airport at 21 miles away taking a 35 - 40 minute drive at most times.
When approaching the lodge along a winding gravelled drive it is difficult not to be struck by the beauty and west of Ireland type magic of the house and its immediate environs, a view that is immediately reinforced on arrival at the house. Pleasure grounds comprising some 34.3 acres / 13.9 hectares surround the house and compliment the wider acreage of picturesque mountainous lands that extend to in excess of 220 acres (89 Hectares). These lands blend naturally into the wider mountain landscape of commonage lands where pleasure walks and bridal paths can be enjoyed. The pleasure grounds within the estate are well timbered and include superb specimens of scots pine, beech, mountain ash and rhododendrons. The sloping nature of the grounds allows distant views out over the garden onto the heather clad mountains and over the distant waters of Glenasmole Reservoir.

HISTORY
Glenasmole Lodge is a home of immense historical significance that has been featured in a number of renowned books including The Neighbourhood of Dublin by Weston St. John Joyce – and In an Irish House edited by Sybil Connolly. In the early 1800’s the original house was destroyed by fire, with nothing but the stone work remaining. The compensation George Grierson received enabled him to rebuild the house in 1812. This he did following the Regency style with plans he himself drew up, so adding the many gables and tall ornamental chimneys. His daughters, on inheritance, altered the appearance to that of a Swiss Chalet, replacing the roof slates with thatch and adding a wood carved balcony. However, the only remnant in the house today of this woodcarving has been incorporated in the fireplace of the main bedroom fireplace. Charles Cobbe replaced the thatch with natural slate during his subsequent ownership.
From the mid-1960’s for nearly forty years the Judd family resided at Glenasmole Lodge and embellished many of the rooms with impressive fireplaces, plaster work and ornamental panelling rescued from Georgian houses facing demolition. The elegant light-filled interiors of the library, the bow-ended drawing room, the dining room, the two staircases and the bedrooms at Glenasmole are filled with authentic eighteenth and early nineteenth century decorations and fittings of a quality increasingly difficult to find today.

MAJESTIC LIVING
The front of the house, facing Glenasmole Valley, was improved during this time by the addition of a long and wide ornamental veranda constructed using antique cast-iron columns purchased at Crowthers in London, a firm famous for the quality of its salvaged architectural ornaments. The decorative finials on top of the veranda come originally from the front of a chemist’s shop in Westmoreland Street.
On the south front an eighteenth-century doorway from a house demolished in St. Stephen’s Green, acts as a garden door. It is complete with its fanlight and incorporates an unusual lantern. Inside there is a great character to the lodge and a homeliness that belies it’s size. It boasts the most wonderful vistas from almost every window, either of the glorious gardens, the valley below or of the picturesque mountain behind.
A Gothic style panelled door leads into an entrance porch with ornate cornicing, parquet flooring and acanthus leaf moulding on the architraves that, in turn, lead into a stair hall, with pine timber carved staircase to the first floor and mezzanine floor. Formal reception rooms include a drawing room with a fine marble chimneypiece and a dual aspect with matching bow windows, a study again has a bow window but in addition has double French doors opening to a garden terrace. The library has a superb and large marble chimney piece, part panelled walls, bookcases with finely carved columns, an ornate Diocletian window and door to the veranda. The dining room has a carved pine chimneypiece, an ornate arch with carved pine pediment. A French door with panelled and moulded architrave with acanthus leaf motif leads from the dining room into the sunroom with it’s Gothic style windows and double French doors to the garden.
On the first floor a vestibule leads to the master bedroom suite with bedroom, bathroom and dressing room and is complimented by a guest bedroom suite, again with bedroom bathroom and dressing room. There are 3 further bedroom suites making 5 in total. A secondary library staircase provides alternative access to the first floor. This naturalistic layout is typical of an Irish garden. The style is sometimes called Robinsonian after William Robinson, the native Irishman, who, in the early twentieth century, pioneered, world-wide, the idea of planting exotic trees and shrubs in a garden in such a way that they would appear ‘natural’ to the place.

However, a number of formal areas contrast with this general natural layout. A large paved terrace faces south, here two garden tables in early cast-concrete are exceptional. The kidney-shaped swimming pool and its pool house in Neo- Regency style have their own discreet setting. The tennis court is screened by a small arboretum of rare trees, many of them imported from the famous English nursery firm of Hillier’s. A cutting garden of hybrid tea and floribunda roses flanks the farmyard.
The plants in the garden form one of the largest private collections of exotic trees and shrubs in the Dublin area. They have been carefully chosen and planted in large groups or in specific colour combinations to give abundant colour and scent during each season of the year.
In summer, eucryphias, hoherias, hydrangeas and clumps of red hot pokers flower against blue skies. The autumn brings the colourful leaves of maples, liquidambers, swamp cypresses and nyssas. In winter, flowering witch hazels can be seen from the windows of the house. Golden-variegated Irish yews and other ornamental conifers light up the driveway. A stone farmstead positioned a short distance east of the lodge comprises a number of stone outbuildings, including some stabling, and an old coach house. The Bell House is a superb opportunity for additional living space or indeed a work at home office subject to planning and is in veery good condition.
An old staff cottage with a belfry is now used as a dry storage area or garage. A short distance again beyond this farmstead there is a sand arena that must enjoy a setting equal if not better than any other and must make the equestrian activities all the more enjoyable. The lands immediately surrounding the house provide some useful grazing and link to the remaining lands, which are largely of mountain quality and amenity value.

Glenasmole is situated in rural Dublin, beside Tallaght and Firhouse. It is the home of multiple scenic and recreational attractions, such as the Dublin mountains and Bohernabreena Waterworks. 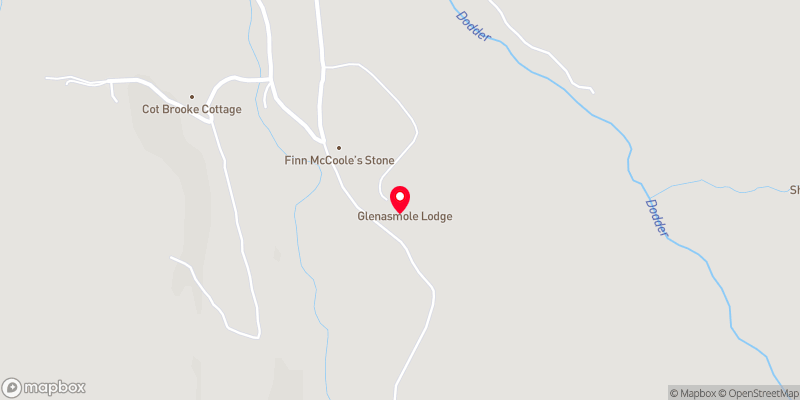